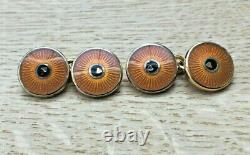 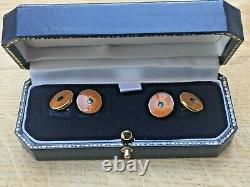 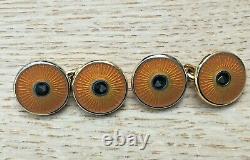 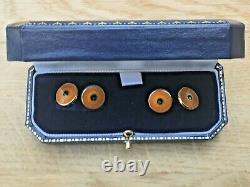 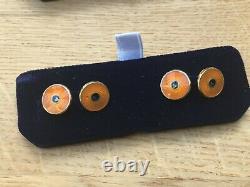 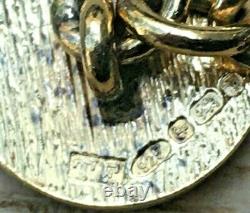 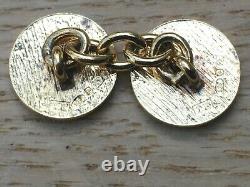 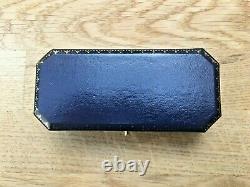 Superb Pair of Vintage Gold on Silver Enamel Cufflinks by Theo Fennell. High quality links in Orange and Black Enamel with heart shaped high light by top jeweller in stylish gift box. A Brief History of Cufflinks. The first cufflinks appeared in the latter part of the 17th Century but they did not become common until the end of the1700s. Their invention is closely related to the development of men's shirt or chemise and a more defined cuff. Before this shirts ended with a simple ribbon and were tied. Were secured with a button or a pair of connected buttons. In the late 18th and early 19th centuries the rise in the middle class, men started to wear a more conventional shirt. In the 1800s formal wear including a dinner jackets were commonly worn so by the middle of the 19th century the modern cufflink had become popular.

The shirt front as well as collar and cuffs covering areas of the most wear were made sturdier. This was practical but when clean and starched, collars and cuffs underscored the formal character of the clothing. However, they could be too stiff to secure the cuffs with a simple button.

As a consequence, from the mid 19th century onward men in the middle and upper classes wore cufflinks. The industrial revolution meant that these could be mass-produced, making them available in every price category.

Early cufflinks of the 17th and 18th centuries were often made of silver and rock crystal. Most Victorian cufflinks being of plain gold or silver with engraved initials, monogram or family crest.

However during the Belle Epoque period more flamboyant designs came into fashion especially fine enamel work by Fabergé. Which was popularised by the Prince of Wales, later Edward VII.

During this time cufflinks became fashion accessories and one of the few acceptable items of jewellery for men in Britain and the U. This development continued into the early 1900s, with more cufflinks worn than ever before. These were available in every type of form, colour and material, incorporating both gemstones and less precious stones and glass in cheaper copies.

Art Deco cufflinks in every conceivable geometric pattern were especially popular in the 1920s and 1930s. Post war cufflinks have tended to favour the solid T-bar rather than the symmetrical ends of previous ages, with some fine abstract mid century modern designs being produced in the 1950s and 1960s especially by Swank in the USA and Stratton in the UK. Cufflinks remain popular and are very collectable with examples ranging from high end examples by first division jewellers like Cartier, Mappin & Webb and Georg Jensen to more mundane but creative designs and interesting advertising cufflinks.

The seller is "cufflink-boy" and is located in Maidenhead. This item can be shipped worldwide.